A BIT OF WINE CHEMISTRY: Lessons from Champagne

Day one of the Champagne study trip initiated a discussion which continued throughout the week of factors impacting aromas and flavors in champagne. Broadly, aromas can be categorized into the impacts of grape variety, terroir, vinification, and post-production events (influencing individual bottles versus entire “batches”).

This article will focus upon the biochemistry of sulfur, nitrogen, oxygen, and sugars in an acidic environment (esters arising from acidification of alcohol); the intent is not intended to be comprehensive. For purposes of this essay, the use of the word aroma will include the complex notes of aging characterized as “bouquet.”

“Although many efforts have been made to characterize the quality and flavor of the compounds in wine… tasting remains the single universal test used… This is because the taste of a molecule, or blend of molecules, is constructed within the brain of a taster.” F. Brochet and D. Dubourdieu, 2001

The general styles of champagne, on the base of each glass. 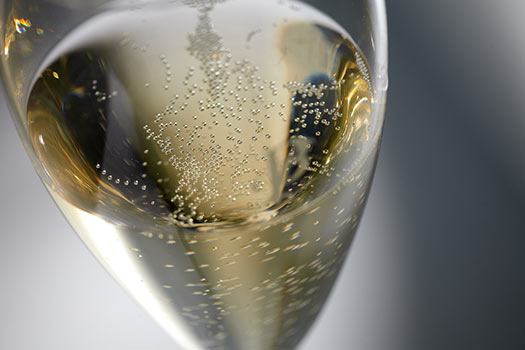 Generally, grape varieties have aromatic precursors in their skins and pulp. For most, excluding aromatic varieties such as Muscat, the process of vinification cleaves and creates chemical bonds which convert these aromatic precursors into volatile compounds- the aromas of wine- which are carried upon the vapors of the alcohols created from glucose and fructose. These aromas may be augmented by selected yeast strains (note that an indigenous yeast in a winery has often self-selected biologically), use of oak, and aerobic or anaerobic (oxidative or reductive) techniques. Sur lie maturation contributes additional nitrogen-based substrates for chemical reactions and mitigates the impact of oxygen exposure.

What do “esters” contribute to wine aromas?

Low molecular weight esters tend to be pleasantly fragrant- aromas of apples, pears, peaches, bananas, pineapples, cherry, strawberry, flowers, lemon, spice, and even butter (ethyl lactate). Unpleasant esters include geranyl acetate (geranium), methyl acetate (glue), and ethyl acetate (nail polish remover). Esters are derived from organic or inorganic acids when a hydroxyl (OH) group is replaced by an alkoxy (O) group. These usually arise from the reaction of a carboxylic acid and an alcohol (note that there are many alcohols other than ethanol in wine). This is a broad category of chemicals, reactions, and aromatic compounds. Critically, these compounds remain in a state of flux as a wine ages with ongoing chemical reactions (mediated by the acid environment) as there is a trend to biochemical equilibrium. The take away point is that these are typically primary aromatic compounds and in the champagne process they are not the desired dominant aromas.

What are thiols and how do they influence aromas?

At the first visit of the trip, the wine maker went directly into the roles of pyrazines and thiols upon the organoleptic properties of disgorged and matured champagne. Thiols are organic compounds containing sulfur with aromas ranging from quite “stinky” (onion, garlic, cat urine, worse) to chemicals which contribute to varietal characteristics (cabernet sauvignon, merlot, muscat, gewürztraminer, pinot blanc/gris) and the smoky aromas of torrefaction. Thiols are defined chemically as containing a sulfyhydryl group; methyl mercaptan is a thiol (methanethiol a distinctive putrid aroma found in some nuts, cheeses, and sewage). Oxidation at harvest and “cold soak” appear to increase the volatile thiol precursors in must. Aromas from thiols are created during fermentation and maturation.

For thiols, yeast strains can impact the chemical reactions and thus the aromas created. Nitrogen sources for thiol formation are the amino acids inherent in grapes (particularly cysteine and glutathione). Higher fermentation temperatures increase the levels of volatile (translate to “smellable”) thiols. These substances require oxygen for formation and their formation is slowed by sulfur dioxide and sur lie maturation. The wine maker discussing this asserted that thiol expression in different format bottles after disgorgement- as identified by smoky aromas- is related to a smaller head space and thus lesser surface area for the wine to interact with air/oxygen in the larger format bottles (the ratio of head space to wine surface area exposed is not linear as bottle size increases). This is why the boutille, the magnum, and the jeroboam will never in their post-disgorgement lives have the same aromatic profile (the boutille is fresher, crisper, and more “citrus” in my notes; the jeroboam is rounder and more mature with a distinctly smoky note).

Pyrazines in Chardonnay and Pinot noir? 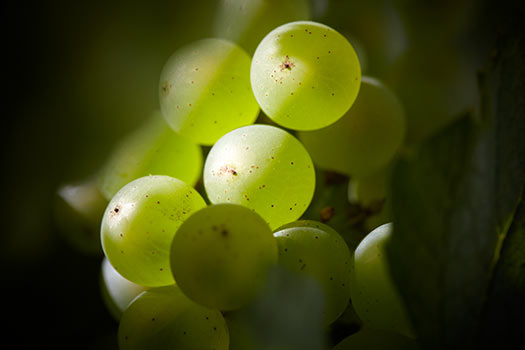 Pyrazines are nitrogen-containing compounds which are produced during the first period of berry development- thus are inherent to the grape. There are 3 primary methoxypyrazines which contribute “vegetal” aromas: 2-methoxy-3-isobutylpyrazine (IBMP) giving earthy, grassy, and green bell pepper aromas; 2-methoxy-3-isopropylpyrazine (IPMP) giving aromas of asparagus, peas, and earth; and, 2-methoxy-3-alkylpyrazine with gives roasty and nutty aromas.

Although most often associated with sauvignon blanc and cabernet sauvignon, and other “Bordeaux cultivars,” pyrazines commonly are found in other varieties but at levels in must which are below the threshold of detection. Pyrazines are cyclic organic compounds containing nitrogen as a part of the carbon “ring.” Methoxypyrazines give the vegetal and herbaceous aromas such as green bell pepper and asparagus in less ripe grapes. The aroma qualities of pyrazines are impacted by the alkyl side chain, riper grapes having shorter side chains and more pleasing aroma profiles. Factors impacting pyrazine levels include: variety, soil, climate, viticultural practices, vinification techniques (solids contain more MP than liquid), and the presence of light during storage or maceration. Pyrazines degrade late in berry maturation. Overall, this is not a desired category of aromas in champagne although the roasty/nutty aromas may be pleasing.

What is the chemistry of aging in Champagne? 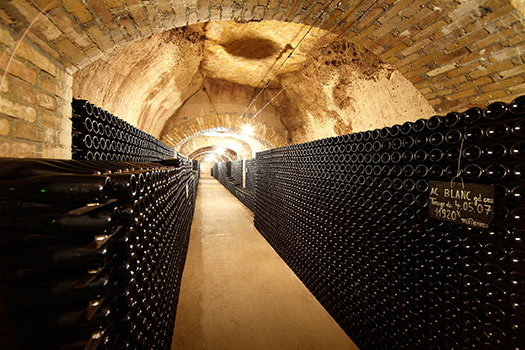 Discussion of the aromas of champagne would be incomplete without consideration of the broad category of biochemical events grouped as “Malliard reactions.” These represent a large group of chemical reactions between amino acids and reducing sugars (sugars with a free aldehyde or ketone group…all monosaccharides are reducing sugars as are some more complex sugars). The chemistry of this is quite complex, generally resulting in the oxidation of the sugar. The amino acid substrate for the reactions can arise from the proteins contained within the grape itself or from those released by the breakdown of dead yeast cells during sur lie maturation (yeast autolysis). Additionally, the disaccharide cellobiose from toasting of oak barrels is a reducing sugar. Obviously, sugars introduced as the dosage represent a significant source of reducing sugars- thus sugar percentage of the dosage can impact the series of chemical reactions and thus the aromas.

Initially described as a part of heat mediated chemical reactions, Maillard reactions can occur at lower temperatures mediated by the acidic environment of wines. The aromas created- primarily esters categorized as lactones- range from toast, smoke, and baked bread to spicy vanilla. The result is a broad range of aroma compounds creating complexity. The more complex the set of substrates, the more diverse the aroma profile created. Thus, the varied stylistic approaches to maturation of non-vintage, vintage, and “recently disgorged” wines results in a profoundly different aroma and flavor profiles.

What about those “clear bottles” so loved by the marketing departments?

A final point which cannot be omitted is the impact of light. Marketing practices have trended toward the bottling of several prestige champagne cuvées in clear glass bottles. Although this results in an attractive presentation for the consumer, it subjects the wine to profound risks as less than an hour of exposure to ultraviolet light can result in the development of off aromas in a wine. The first 2 houses visited both present their prestige cuvées in clear glass bottles; at a latter visit, a Côtes de Bar producer announced that his future premium bottlings will be in dark brown bottles to minimize the impact of “lightstrike.”

The effect of lightstrike is to transform amino acids into malodorous sulfides. At low levels, the impact may just be diminution of fruity aromas. Fully expressed, lightstrike is identified by aromas of cabbage, damp cardboard, and sewage. For the glassy-eyed reader, note that this represents a set of light mediated chemical reactions involving sulfur and nitrogenous compounds both previously discussed. (There is an excellent review of this problem dated July 7, 2016 by Alex Hunt, MW on www.jancisrobinson.com, quite timely).

Interested in learning more about Champagne? Sign up for our Champagne study trip or Champagne Master-Level program.

Want to receive a free sample chapter?
Complete the form below for
more information and receive a
FREE sample chapter
Tweet
Published in Blog
Tagged under
Log in to post comments
back to top