Learning and loving (without counting): a week in the hills and cellars of Alsace 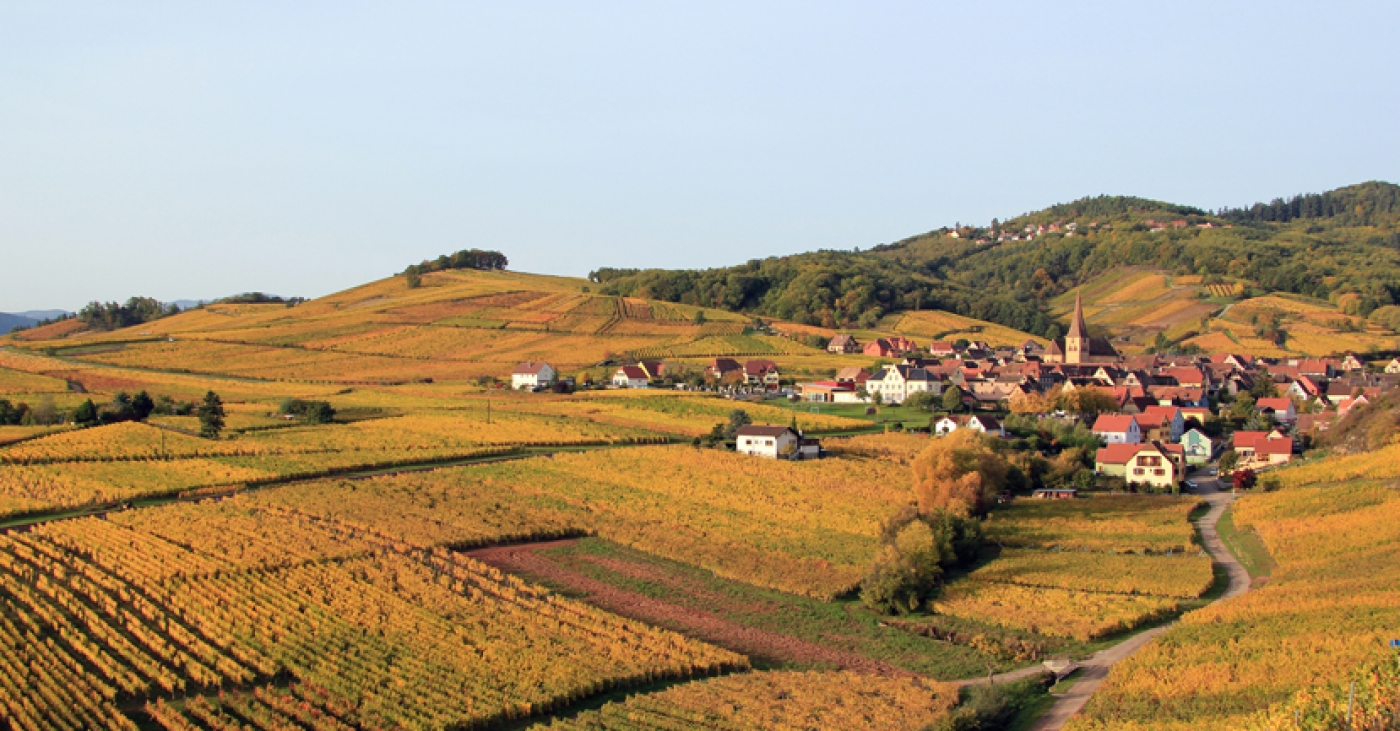 There’s no wine region I enjoy visiting more than Alsace.

It’s beautiful, of course – and not just the half-timbered houses around which a profusion of flowers seem to float, or the grand hillside vineyards romping up to the forested Vosges mountains, always somehow bigger and more imposing in scale than those of Burgundy. The growers are fascinating characters, too, as if their historical and geographical position, wedged between (and much fought-over by) France and Germany, has given them an independence of thought which eludes those with a more settled position in each wine culture.

Then there’s the wines. It’s commonplace to say that Alsace wines are underappreciated -- but it’s true. For me, no white wine region can offer more diversity and intrigue than Alsace, nor does any single regional range of white wines appeal more to my palate...

Our next wine study trip to Alsace with Andrew Jefford is scheduled for June 7-12, 2020. A few seats remain available. Learn more

Riesling, of course, is unrivalled for those moments when you want something taut, bracing and stony, as we all occasionally do, but I also love perfume, softness and richness in white wine, and Alsace is unmatchable in this respect. Its spectrum runs all the way from the quietly demonstrative and sappy (Pinot Blanc, Sylvaner and the increasingly popular Gentil-style blends, as well as Alsace’s disarmingly fresh, dry Muscats) right the way through to the extraordinarily expressive, sometimes unctuous universe of Pinot Gris and Gewurztraminer styles. If you’re a sparkling wine fan, no French region has more significant Crémant sales than this one.

A recent Wine Scholar Guild Study Tour in late October 2019 gave seventeen students plus Tour Guide Mary Kirk and myself the chance to discover all of this anew – or, in the case of some of our fellow-travellers, for the first time.

We began in the northern part of the region (counter-intuitively called Bas Rhin) with a visit to Guillaume Mochel of Frédéric Mochel. One of the themes of our week was the way in which appellation regulations in Alsace have become more supple in recent years, allowing groups of growers to create the kind of wines they want to make. That’s revolutionary for France, where orders have tended to come from on high – and Mochel’s village of Traenheim provides perfect example of how the system works. The growers have got together and written rules for a ‘Traenheim’ wine for the three members of the Pinot family (Blanc and Gris, plus Noir made as a still white) together with Auxerrois.  Guillaume’s own 2017 Traenheim, half Pinot Blanc and half Pinot Gris vinified in older barriques, was totally convincing and a very different proposition (both conceptually and in flavour) from most Alsace whites.

The very end of the trip, meanwhile, gave us an unrivalled insight into Crémant production via a visit to specialist Dopff au Moulin (1.5 million bottles produced of Crémant produced here every year – as much sparkling wine as still). Look out for the game-changing 2015 Chardonnay Brut Nature Sans Soufre Ajoutée Crémant: it’s grippy, textured and deep. Not qualities I’ve been able to associate with Crémant d’Alsace in the past. 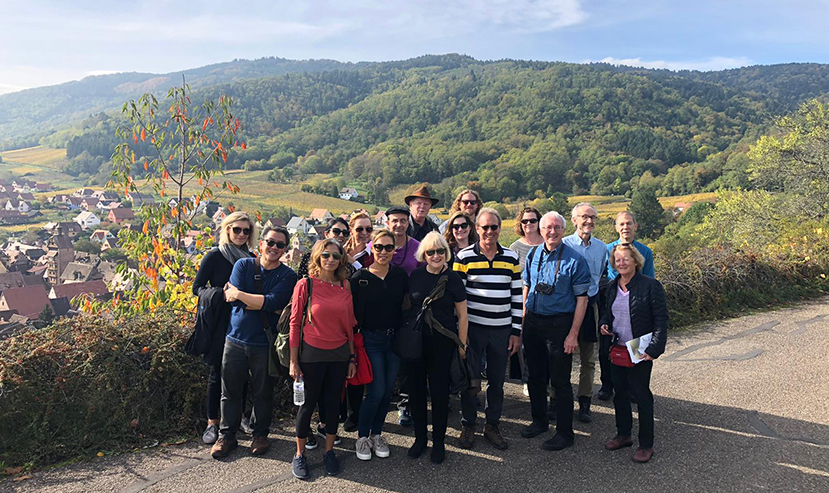 If you’ve read The New France, you’ll know just how highly I rate Olivier Humbrecht MW’s work, and Olivier gave us a masterclass on Pinot Gris when we called in at his Turckheim cellar. It’s impossible to summarise everything you can learn during two hours with one of the greatest wine craftsmen in the world, but here are a few teasers: 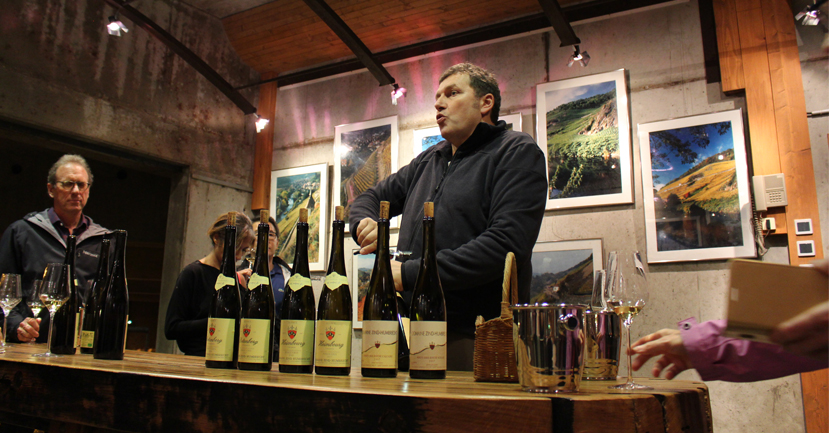 Another recurrent pleasure of the trip is the chance to taste older wines. Both Léon Beyer and Trimbach are great believers in the importance of ageing wines prior to sale. The current Beyer vintage for those who call to buy at the cellar, believe it or not, is 2009, and we walked round the Trimbach cellar marveling at the 2.7 million bottles the company has stowed away down there, slowly ageing.

Change is coming to both of these great old merchant houses as well, though – notably via the enthusiasm of the new generation at Trimbach for single vineyard and Grand Cru wines. The Trimbach Rieslings from Geisberg (2014) and Schlossberg (2016) were everything we hoped for – not least in the wines’ clear differentiation. Were we tasting the difference between granites and dolomitic marls? Or is it the position and aspect of the two sites which counts for most? These kind of terroir discussions are something we revisit several times during the week.

No visit to Alsace would be complete without at least one detour to one of this region’s great co-operatives, and on this occasion we chose to visit the Cave de Turckheim. Terroir, yet again, was the theme of our tasting here – though this 400-member co-operative tackles the topic in a different way to other producers. It doesn’t just confine itself to Grand Cru wines (though it has some excellent examples, especially from the nearby Brand) but also markets a series of varietal wines derived from a single soil type, notably a series of wines from Granite and others from Limestone and Marl. Back to the debate of the day before …

You’ll also find some great talkers among Alsace growers. Jean-Michel Deiss is world-famous for his lecturing abilities, of course, but our group hugely enjoyed listening to Philippe Blanck of Blanck, a little later in the week Jacky Barthelme of Albert Mann -- and finally the inimitable Catherine Faller of Weinbach. In the vineyards with Philippe Blanck

Philippe is one of the most humane of all wine growers, stressing the importance of “connecting with your emotional database” as you taste and relating to wines emotionally; he even introduced us to his QiGong approach to wine tasting. Jacky, by contrast, can be wickedly down-to-earth and amusing. The big excitements at the Mann domain continue to be connected with Pinot Noir, for which it is unquestionably a regional leader. Yes, Jacky said, global warming was playing its part in this – but so too were advances in understanding, based in his case on repeated visits to Burgundy. And he pointed out, with a gleam in his eye, that in contrast to white wines “no one is arguing about the price of the reds”.

Catherine Faller is the ultimate authority on matters gastronomic in connection with Alsace wines, and it’s very dangerous to visit her prior to lunch (as we usually do) since her descriptions of sublime food and wine matches can send our stomachs into a thunderstorm of rumbling. (On our previous visit she whipped up some Munster sandwiches to keep the rumbling under control.) The Fallers had guests for lunch on this occasion and we tasted in the kitchen as delicious soups and fish dishes were being prepared all around us, which heightened the gastronomic focus. After we’d salivated over the 2018 Pinot Gris Ste Catherine (“that’s the wine for mushrooms”), we moved on to the “expensive perfume” of the 2018 Furstentum Grand Cru (“very good with a spicy tartare”).  What, though, about its alcohol level, one of the students asked: “When you love,” retorted the ever-glamorous Catherine, “you don’t count.” 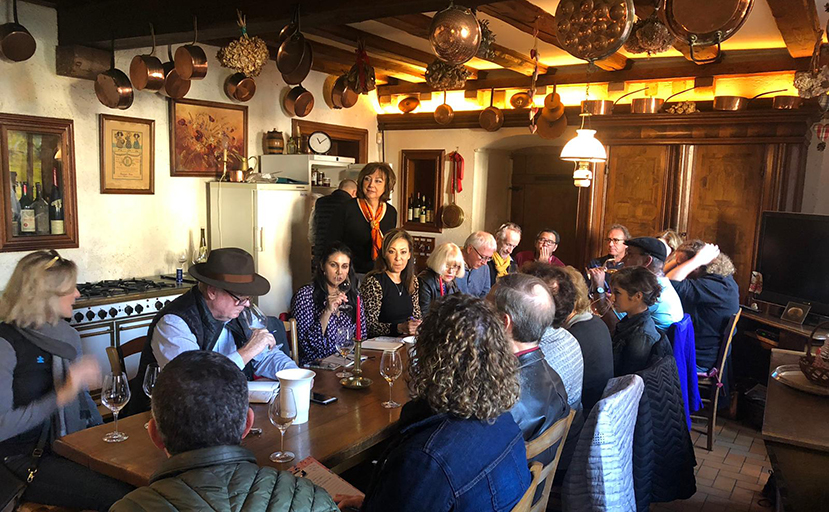 In the kitchen with Catherine Faller at Domaine Weinbach

Another visit where the insights tumbled out one after another was to Félix Meyer of Meyer-Fonné, where quality never ceases to rise, notably for Gewurztraminer. He thinks of Muscat Ottonel as “an aromatic Chasselas,” for example, and sees a clear division in Alsace between the set of Rhine varieties (like Riesling and Sylvaner) and those which echo Burgundy (notably the Pinots – and he stressed to us that many old plots of ‘Pinot Noir’ in Burgundy itself are as much as five per cent Pinot Gris).

“What’s really interesting about Gewurztraminer,” he told us, “is its skin tannins” and their precious rich bitterness – but to get those right, you can’t hurry either the ripening process or the pressing (over which Meyer generally takes eight or nine hours). He echoed Olivier Humbrecht in stressing the importance of slow but firm pressing. (“After pneumatic presses replaced the old plate presses,” Félix said, “many growers stopped recognizing their Gewurztraminers.”) One thing was certain: the sumptuous, seamless, subtle and graceful Gewurztraminers we tried here proved conclusively that Meyer does indeed get it right.

There are other visits, finally, where it’s not so much what is said that impresses as what is shown – and our much-anticipated visit to Jean Boxler of Albert Boxler is the perfect example here. Purity, impact and sculpted precision characterizes every one of his wines, to the extent that it almost feels impertinent to talk or to ask questions as you taste. The variety-exceeding 2017 Sylvaner right the way through three shockingly good Rieslings to an almost salty 2016 Brand Pinot Gris and a sumptuous 2016 Gewurztraminer Réserve held us enthralled to the end. I can’t wait to get back to Alsace next June.

Our next wine study trip to Alsace with Andrew Jefford is scheduled for June 7-12, 2020. A few seats remain available. Learn more

Learn more about the wines of Alsace & from Andrew Jefford: