The term natural wine conjures a plethora of reactions. To some it symbolizes a cultural movement towards honest winemaking, to others it is merely a fad for funky wines. The term is as vague as it is vast.

There are some who believe natural should refer only to zero-zero wines (wines that have no added sulfites and apply a minimalist winemaking approach). However, the term is more generally understood as an umbrella status which encompasses any wine made with an attention to the ecosystem and biodiversity, low intervention vinification, and an authentic representation of terroir.

Including biodynamic philosophy under this umbrella, natural wine production does not use any chemical pesticides, herbicides, fungicides or fertilizers. It promotes the use of naturally occurring indigenous yeasts to stimulate fermentation and avoids any chaptalization (the addition of sugar before fermentation). The use of sulfites is generally tolerated on a sliding scale, where winemakers aim to add as little as possible, however a minimal amount is accepted often at the bottling stage in order to protect the stability of the wine. It is in many ways a return to traditional winemaking and savoir-faire, with an effort to limit pollution and machinery by hand harvesting, using horses to plough between the vines, and relying on gravity to manipulate the grapes during the vinification.

Despite certain preconceptions, natural wine is not a genre of wine but an approach to winemaking. The results are diverse, spanning from artisanal and rustic easy-drinking wines, to some of the most revered and elegant cuvées in the world.

Paris of the 90's - The New Wine Capital

Since the late 90's, the presence of natural wine in Paris has increased exponentially. Sommeliers, restaurateurs, and cavistes (wine merchants) started to move away from the generic wine lists of the French brasserie and instead looked to shine a light on the rising biodynamic and natural wine stars of France. Today, every arrondissement in Paris offers a wide range of establishments, from bottle shops to Michelin Star restaurants, which take inspiration from these early pioneers. Applications like Raisin @naturalwineapp are a great way to discover the best natural wine spots in Paris and cities worldwide.

The Parisian cave à manger is the trifecta of caviste, bar, and restaurant. They range from wine shops offering a glass with some local cheese and charcuterie, to accomplished cuisine alongside a curated wine menu.

These intimate emporiums are managed by knowledgeable people who are passionate about the wine and produce they have to offer. They know the winemakers, the stories, and the hidden gems. They are the beating heart of the wine community in Paris. Each with its own atmosphere and specialty, the cave à manger is a perfect setting to imbibe in conviviality, to meet after work, share a bottle with friends, or drop in on a Sunday afternoon. It also allows you to sip and sample without the confines of a full fine-dining restaurant experience. 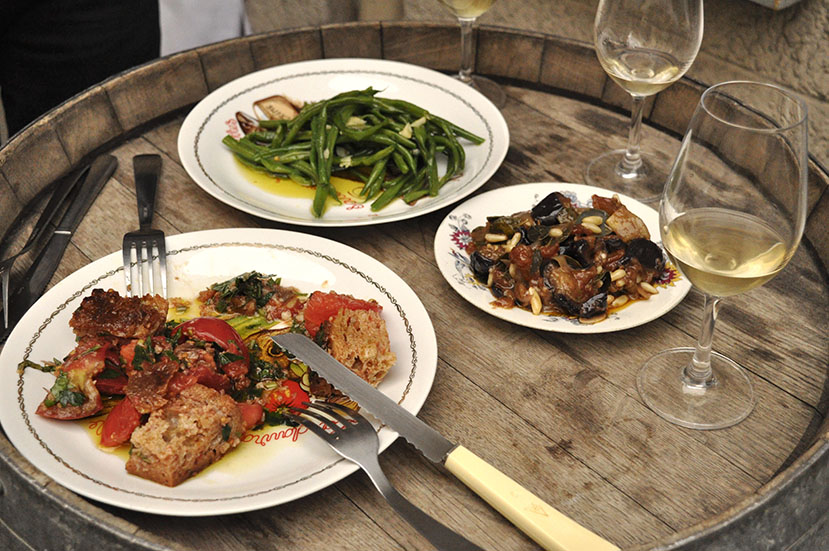 Délicatessen Place - A wine shop of dreams and seasonal cuisine

An annex to the renowned bottle shop Délicatessen Cave, Mireille Langlois and her son Gabriel took over the old cobblers shop next door to create a relaxed environment where clients could enjoy their expansive list of wine references. Partnering with Chef Hugh Corcoran, whose inspiration lies in his experience working in the Basque Country, they promote the ethos of “tradition and culture, within a context of time and place”. His nourishing plates of ratatouille and green bean salads sing of seasonality and their human approach to wine makes Délicatessen a wonderful place to savor. 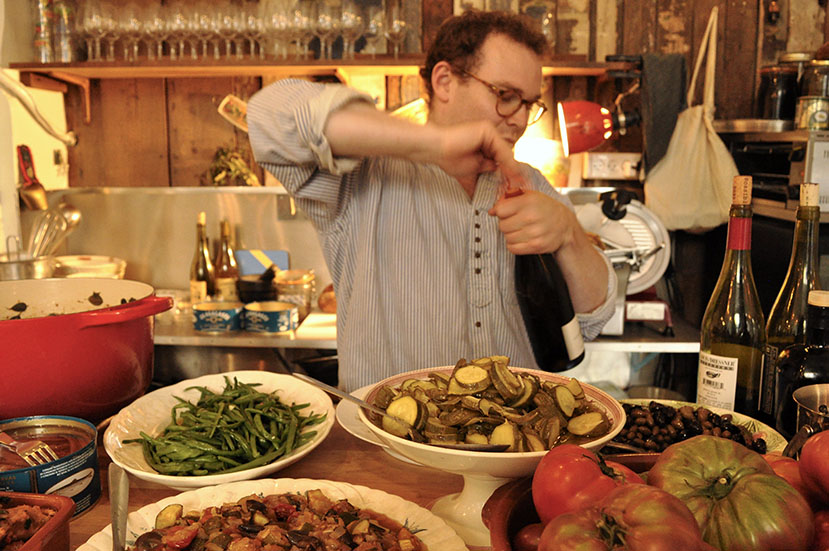 Bar Etna - A touch of Sicily on the left bank!

If you find yourself wandering around Saint-Germain in the 6th arrondissement, a stop at Etna is a must. This lively and chic bar with its roots in Italian wines is a fantastic choice for weekday drinks. A wooden boat-like structure fills the room, around which clients sit and owner Charles Courtel takes the helm recommending his latest wine acquisitions. Offering simple yet delicious tapas to share, it is a favorite spot for a glass of Sicilian maceration and some homemade tuna rillettes!

Loïc Minel, aka Lolo, and Christophe Juville lead the new generation of Parisian caves à manger. Recently joined by Chef Maud Sadok, whose previous positions include natural wine institutions such as The Mary Celeste and Goguette, Lolo Cave exemplifies the best of small plate cuisine. Each dish balances delicate intrigue with intense flavor. Be it the garden peas, mussels and grapefruit, or the braised pork and kimchi paired with a glass of Bora Lunga from Cinque Campi in Emilia Romagna, everything is sublime. All the while surrounded by a sultry velvet interior creating an atmosphere not to be quickly forgotten. 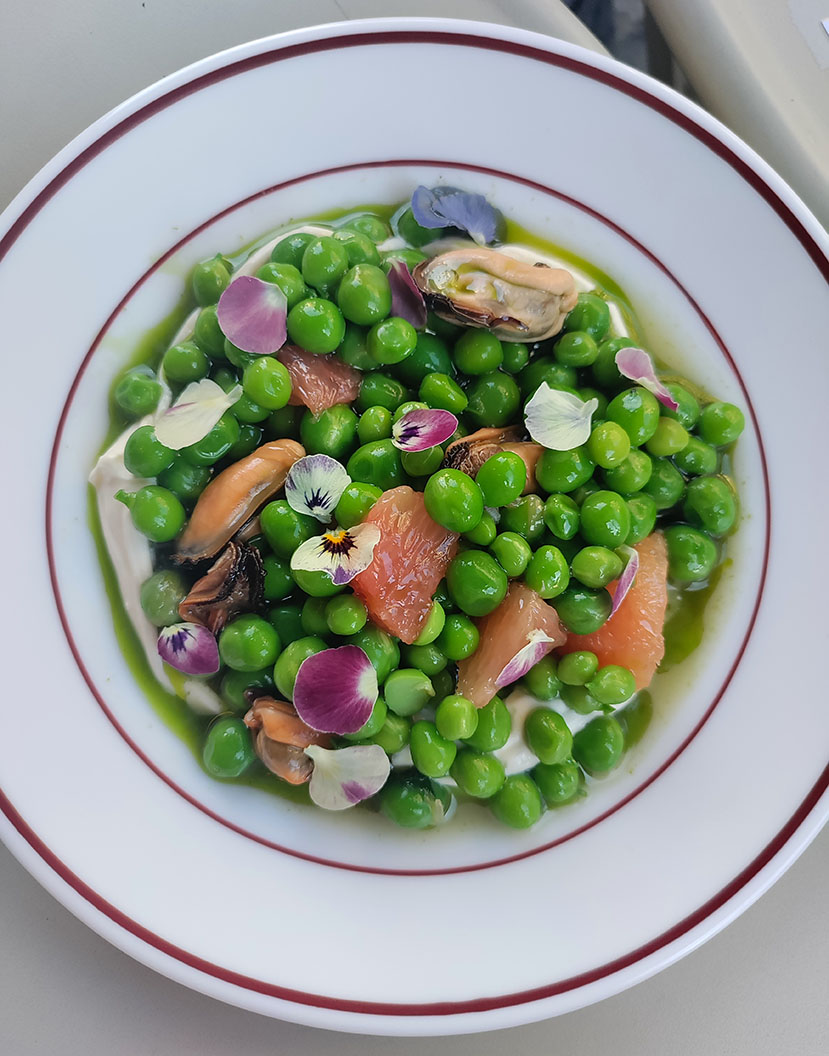 The fraternity, headed by Olivier Roche, which manages Coinstot Vino, was among the first to launch the Paris natural movement of the 90's. They champion classic French natural winemakers such as Thierry Puzelat and Guy Breton, alongside charcuterie and their coveted 'nduja pizza. The setting, in the oldest and one of the most beautiful covered gallery in Paris, Le Passage des Panoramas, provides a perfect backdrop for the original cave à manger.

It was somewhat of an unexpected arrival to the natural wine scene in Paris when Jessica Yang and Robert Compagnon opened their ice cream shop and wine bar. The pair, who also founded restaurant Le Rigamarole next door, had the idea to blend their love of natural wine with the creative flavors of silky smooth handmade ice cream. Pairing ice cream with wine remains an ambitious task, however this does not take away from the joy of a scoop or two of their olive oil ice cream while perusing their dynamic wine selection! 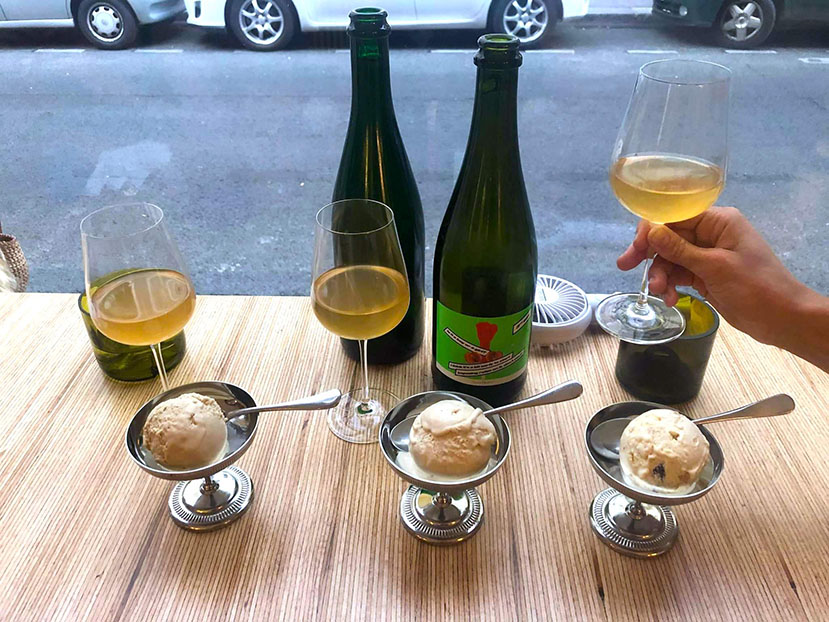 Harriett Gifford is a freelance writer based in Paris, specializing in biodynamic and natural wine. After studying Classics at Kings College London, she moved to Paris to study wine management at Le Cordon Bleu. She has since worked for Champagne Fleury, running their cave à vin in Paris, alongside writing for magazines such as Pipette, The Wine Zine, Penticton Pacific and orange peel magazine.