as did stainless steel and improved access to electricity and clean water. Wine commerce and industry expanded during this period, too; automation and mechanisation increased productivity, infrastructure spending improved road and rail networks, and the Marshall Plan encouraged collaboration and promoted modern working procedures. Sadly, immigration to industrial centres during this period damaged Piedmont—an agrarian society mainly consisting of small family farms. Growers encouraged their children to seek a ‘better life’ elsewhere, and farmers grubbed up Nebbiolo in favour of dolcetto, a high-yielding, early ripening variety with a shorter production cycle.

Nevertheless, a modest cohort of enthused, farsighted growers worked hard to improve and innovate local winemaking. By 1961 Beppe Colla—who had already visited France—began vinifying single-vineyard wines, as did Bruno Giacosa in 1964. Meanwhile, in Barbaresco, Angelo Gaja was estate-bottling and experimenting with green harvest and barrique. And, by 1966, the Consorzio had instated the Barolo DOC. Shortly after, Giacomo Oddero endeavoured to bring water to the region, recognising the need for better sanitation—a crucial moment for quality Piedmontese wine production. Still, wine prices remained low well into the late-20th century; many locals remained poor and younger generations continued to flee the countryside for new beginnings elsewhere.

Alas, between 1976 and the late-90s, catalysed at the tasting at Domenico Clerico’s house in ’86, an altogether more contentious revolution took wind, known colloquially as the Barolo wars. Altare et al. took Barolo international in both commerce and style. The decade followed brought dramatic social change; wine and land prices rose sharply, tourism increased, local tradespeople were busy, and the world got to know Barolo—the place and the wine. Philosophical objections aside, this period benefitted everybody. ‘Modern’ and ‘traditional’ producers enjoyed spectacular success in the global market. This is particularly true for a handful of ‘cult’ producers (G. Rinaldi, Cappellano, B. Mascarello, etc.), whose wines now sell for unimaginable prices following their discovery by prospecting seekers flocking to the region en masse.

Albeit tempting to chase these ‘unicorn’ wines from famed Langhe estates, more exciting and accessible is discovering ‘rising stars’ founding new estates against all odds, as well as current generations respectfully reinvigorating established family wineries—the ‘next big things,’ if you like. Many years of steady progress and a radical revolution set the stage for contemporary Piedmont, home to countless rousing and underexposed producers. Many of these winemakers are, in Piedmont at least, producing some incredible wines with refreshed, inspired, and conscientious approaches in both the vineyard and the winery. Below, from Roero to Monforte d’Alba, I’ve listed nine Piedmontese rising stars—the outsiders and locals—that I think should be on all drinker’s watch lists.

Today, Piedmont’s international allure attracts international talent; its bucolic hills are home to an array of unconstrained winemakers of international provenance. These ‘outsiders’ bring an unrelenting, vibrant and worldly perspective, adding to a burgeoning experimental and innovative sentiment and helping raise local varieties to new heights among new drinkers in untapped markets.

Cantina D’Arcy - In Barolo, New Zealand-native Tom Myers—who previously spent time in his native army—farms an 8500m2 parcel of old vines between Cannubi and Monrobiolo di Bussia. Following formative experiences working at Benjamin Leroux, Marquis d’Angerville, Alain Graillot, Place of Changing Winds, G. Rinaldi, and more, in 2020, Myers crowdfunded to launch Cantina D’Arcy, offering investors allocations of his future wines. The domaine, which takes his maternal grandmother’s maiden name, produces Langhe Nebbiolo, Dolcetto d’Alba, and in 2024, a Barolo. Inspired by the wines of iconic winemakers like Lalou Bize-Leroy and Gianfranco Soldera, Myers’s freshman releases, plush and sumptuous, speak to his efforts, commitment, and openness in both the vineyard and the winery.

Philine Isabelle - Having abandoned formal education following a brief stint studying Politics and Administration at Konstanz, Philine Isabelle Dienger spent nearly a decade working at various European biodynamic estates, including Odinstal, Pranzegg, and Heinrich, as well as working as a consultant for ‘master pruners’ Simonit & Sirch. Now, from her cellar in Monforte, Philine, having dropped her surname for her domaine Philine Isabelle, produces remarkably harmonious wines which have generated frenzy among those fortunate to have tasted. Philine and Myers tend contiguous parcels, though Philine also purchases fruit from trusted growers and bottles both Barbera and Chardonnay. The ramifications of Philine’s near-infinite efforts, both small and large, are evident in every carefully curated bottle, truly one to watch. 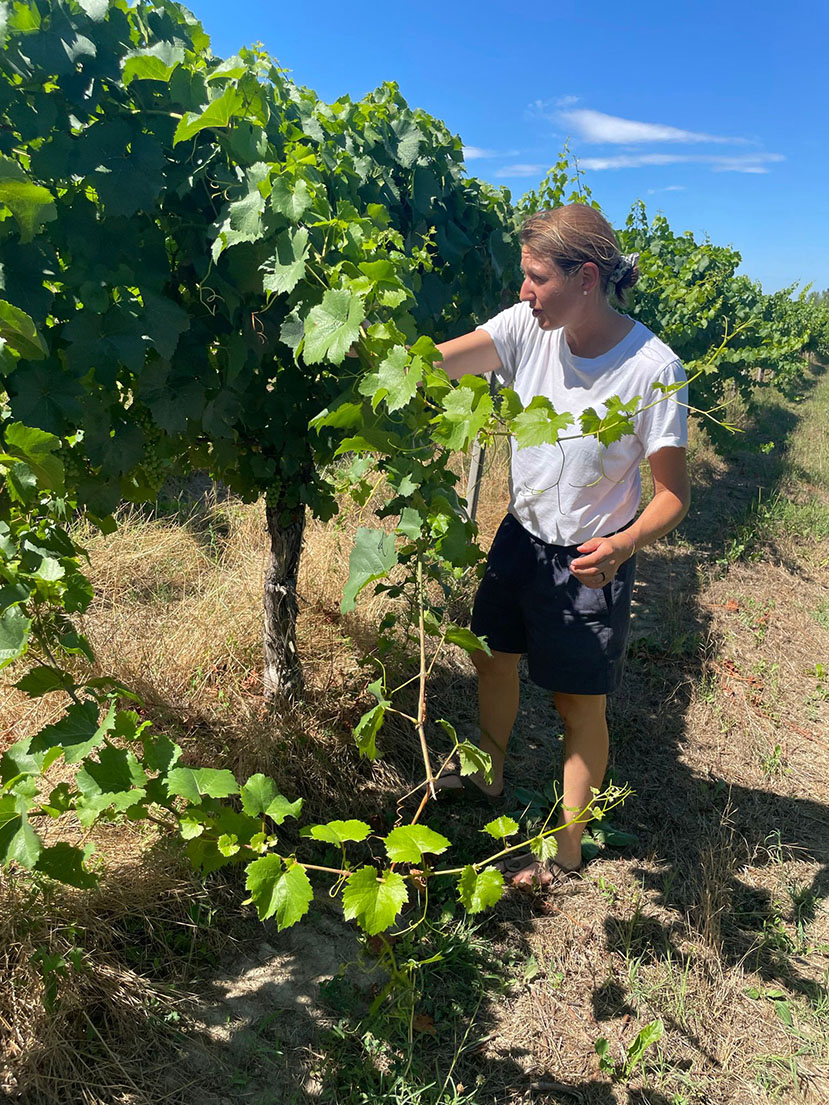 Lalù - In Serralunga, Turin-born ‘city girls’ Lara and Luisa manage their domaine, Lalù—a portmanteau of the pair’s names. After working at some of Burgundy and Piedmont’s most prominent estates—including Cecile Tremblay and Trediberri—and earning the trust and respect of the locals, the pair purchased their first vineyard in La Morra in 2015 and now farm 3.5ha in total, shared between Nebbiolo and Barbera. Working out of a converted workshop in Serralunga d’Alba, their farming is meticulous, and their winemaking is informed, experimental, and worldly, producing approachable, elegant, and bright wines. 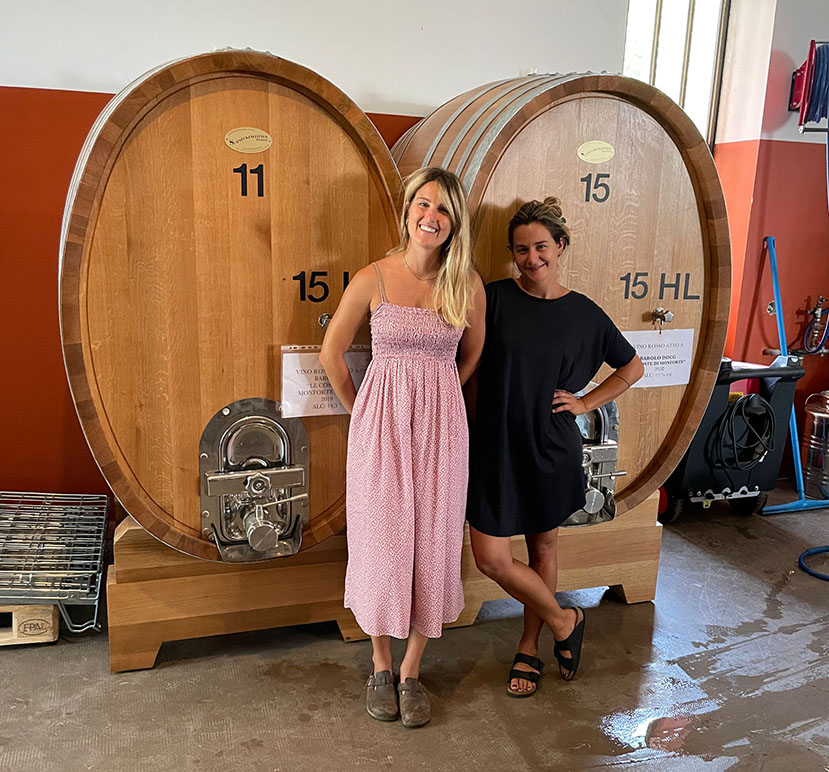 Fletcher Wines - Finally, in Barbaresco, Australian Dave Fletcher, principal head of wine production at Ceretto, oversees his eponymous Fletcher wines from the former local train station, which he and his wife Eleanor carefully renovated. Having obtained a degree in winemaking, Dave gained practical experience at estates in Australia, Santenay, California, and Kazakhstan. In 2007, he worked harvest at Ceretto but later returned to Australia, farming Nebbiolo in Adelaide and the Pyrenes. After later accepting a full-time position at Ceretto, Dave also began producing his range of soulful and precise wines. Today, his Chardonnay ranks among the region’s best, while his Barbareschi—expressive and expansive—remain distinctly underappreciated among wine circles.

Local Piedmontese winemakers have pursued qualitative change for many decades. Many, like Giovanni Battista Burlotto, traveled and read French wine-growing texts, implementing substantive changes in the vineyard and the winery. Others fought for standards relating to yield and viticulture practices. Today, travel is expected, and current generations know fine wine and global markets; those who pursue wine growing are respectfully reinvigorating family estates and establishing new domaines.

Trediberri – Nicola Oberto’s great-grandparents once fortuitously rented their parcel in Rocche dell’Annunziata to the late Renato Ratti on the premise that he hired their son, Federico, Nicola’s father, where he stayed until the early 2000s. After working in local enoteca as a boy, Nicola pursued a career in finance, which he quickly left in favour of wine growing, encouraging his father to ‘go it alone.’ In 2007, the ‘three from Berri’—Federico, Nicola, and Vladimiro—planted 5ha of vines. In 2010, having previously sold most of their crop, the trio bottled their first vintage as Trediberri. Nicola, a spunky, worldly character, has progressively improved his wines, carefully crafting a compelling aesthetic defined by freshness and vivacity, teasing out every ounce of potential from the estate’s fruit. For now, these wines, which I consider to be some of the best contemporary Langhe wines, still represent excellent value.

Diego Conterno – In 2000, Diego—a winemaking graduate and apprentice of Beppe Colla—sold his share of Conterno-Fantino and started afresh. In 2003 the first bottles labelled ‘Diego Conterno’ were sold, and in 2005 the estate’s entire production was domaine bottled. In 2010, Stefano, who I tasted with recently, joined the family business; he and his father have slowly expanded production and improved quality—recruiting consultant Gian Luca Colombo to support. In 2018, the pair increased their holdings, adding vines in Monforte Le Coste, a promising and budding vineyard. Diego Conterno’s recently bottled 2018 Baroli outperform vintage conditions; equally, vintages ’19, ’20, and ’21 are compelling from botti. Readers might consider stocking up before critics catch on.

Bruna Grimaldi – From the family’s winery in Grinzane Cavour, Simone and Martina Fiorino—who now officially own the domaine—are reinvigorating and reimagining tradition at Bruna Grimaldi. The pair’s mother and father, Bruna Grimaldi and Franco Fiorino, first decided to estate bottle in 1989, launching the Bruna Grimaldi label in 1999. Simone joined the business after graduating from Alba wine school; meanwhile, Martina obtained a business degree and worked as a wine buyer in London. The family farms vines from Roddi to Serralunga, with a prized plot, ‘Vigna Regnola’ in Badarina. Simone’s work in the vineyard is some of the most considered ones, and Martina is treading new ground internationally. These are excellent wines that will garner critical acclaim in years to come. 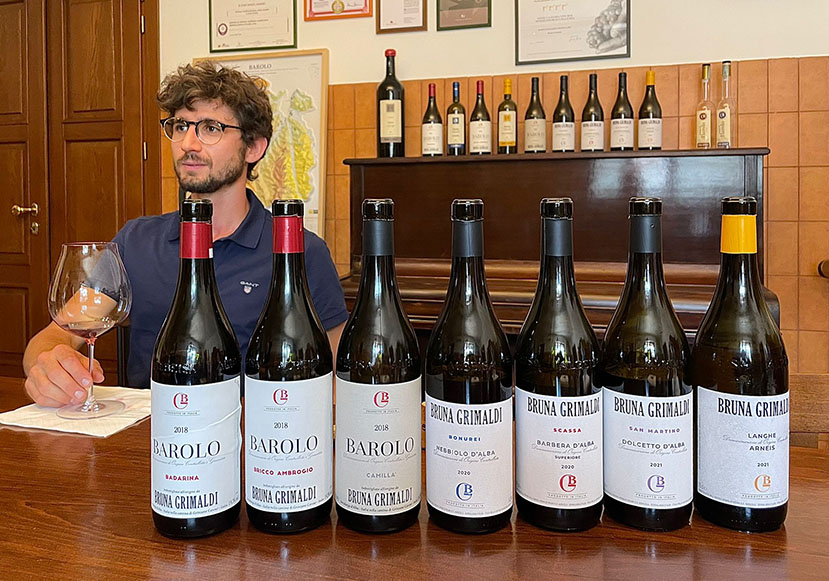 Bricco Ernesto – In Steinberg’s ‘Vines of San Lorenzo,’ Langhetti considered folk from Roero a foreign people. Today, Roero is much more closely connected to Langhe, though still less revered globally. Nevertheless, many growers are pioneering quality wine. Among the most exciting of these growers is Renato Vezza of Bricco Ernesto. Renato’s holdings are located on one of Priocca’s tallest hills surrounded by hazelnuts, which Renato still maintains. Ernesto produces two wines, a Vino Bianco and Vino Rosso (Nebbiolo), totally less than 2000 bottles per vintage. Vezza’s Arneis is macerated and fermented for more than 100 days and rewriters the rulebooks. Microscopic quantities but worth searching out

Mapmaker and journalist Alessandro Masnaghetti recalls the infectious and overwhelming energy enveloping Langhe in the early-to-mid ’90s. Those spending sufficient time ‘on the ground’ today will be swept away by an equally contagious atmosphere. Yet, despite rising prices, contemporary Piedmont remains peculiarly underexposed and misunderstood. Rising stars and recent generations are pursuing innovative and careful viticulture and informed and worldly winemaking at both established and burgeoning estates. Savvy readers will surely reap the rewards of exploring Piedmont in greater depth.

Joshua Dunning was born in Stoke-on-Trent and raised in Cannock, Staffordshire. After a brief spell working as a labourer, he returned to education and obtained a degree in Economics and a masters in Supply Chain Management, going on to work for numerous multinationals. Having not grown up around wine, Joshua’s interest piqued in his mid-20s, following a series of fortuitous experiences. He soon began buying as much wine as he could afford, as well as absorbing wines ‘literary canon’—including many older texts. Then, shortly after visiting Piedmont in 2018 he launched his blog Word on the Grapevine, using digital media to showcase winegrowing and share insights. Since then—now working in finance—Joshua has travelled extensively, worked harvests in Burgundy and written for numerous institutions and publications.