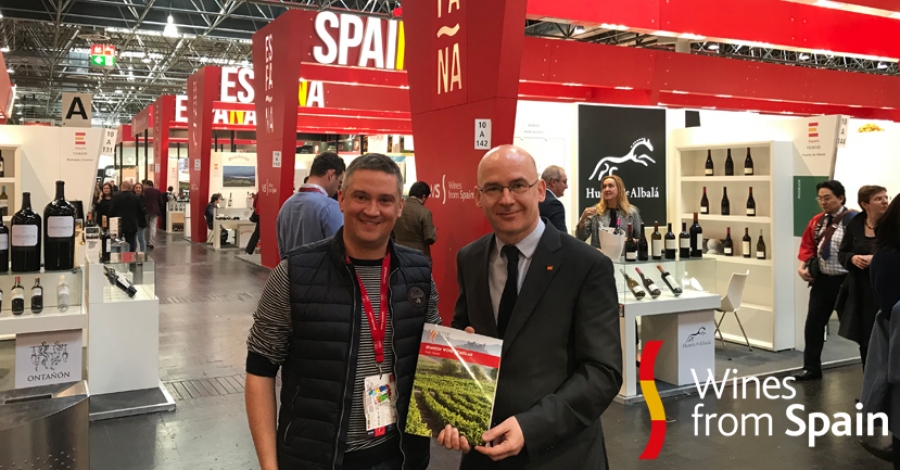 Spanish Wine Scholar™ launches in October 2019 and we are excited to announce the program has been endorsed by Wines from Spain, the public face of ICEX Spain Trade & Investment government agency.

The Spanish Wine Scholar™ joins its acclaimed sister programs, French Wine Scholar™ and Italian Wine Scholar™, in providing an advanced and comprehensive specialization study and certification program.  Spain is home to one of the oldest wines styles in the world, sherry.  It is also the birthplace of many of the world’s finest red grapes, including Tempranillo, Garnacha (Grenache), and Monastrell (Mourvèdre). Despite this rich history, Spain remains relatively unfamiliar to many students of wine.  The Spanish Wine Scholar™ will give students an appreciation for how tradition and modernity perfectly coexist and why Spain is one of the most exciting and enviable countries on the world wine stage.

“Wines from Spain is pleased to have had the opportunity to witness and consult on the development of this much needed and important Spanish Wine Scholar program since its inception. The program showcases the richness of Spanish wines - their authenticity, huge diversity and premium quality - combined with the rich culture and history that gave rise to their origins.  The program offers a great opportunity for those who want to widen their knowledge of the wines from Spain."

“The wines of Spain have resided in the shadows of those from France and Italy for decades. Today, Spain is producing some of the world’s finest and most interesting wines, both in terms of quality and value. The launch of the Spanish Wine Scholar™ program is the culmination of a nearly two-year effort, and I am proud to put Spain in the center-stage spotlight it so richly deserves.”

The Wine Scholar Guild’s network of program providers have been preparing for the launch. During this pre-launch phase over 120 instructors from around the world had full access to the colour study manual, the Guild’s signature in-depth online materials and a series of live review webinars led by the program’s Education Director, Rick Fisher. The feedback from instructors has been overwhelmingly positive. Kim Berdusco, DipWSET, CWE, CS, SWS Instructor at IWEG in Toronto comments:

“I would recommend the Spanish Wine Scholar program to anyone looking to learn more about the wines of Spain. It is a comprehensive, in-depth study program which is organized in a structured format and delivered in an enjoyable manner.“

One of the first instructors to sit – and pass – the Spanish Wine Scholar™ exam is Jimmy Smith of the West London Wine School. Jimmy was awarded the IWS Instructor of the Year 2018. Jimmy notes:

“The SWS course is an absolute must for anyone who wishes to master vinous Spain and sits proudly in its’ vigour and depth alongside the FWS and IWS.”

The finishing touches to the Spanish Wine Scholar™ are in progress. Based on feedback from the instructors, the study manual and online material are being enhanced by Rick Fisher and Jonas Tofterup, MW, of Iberian Wine Academy in Málaga.