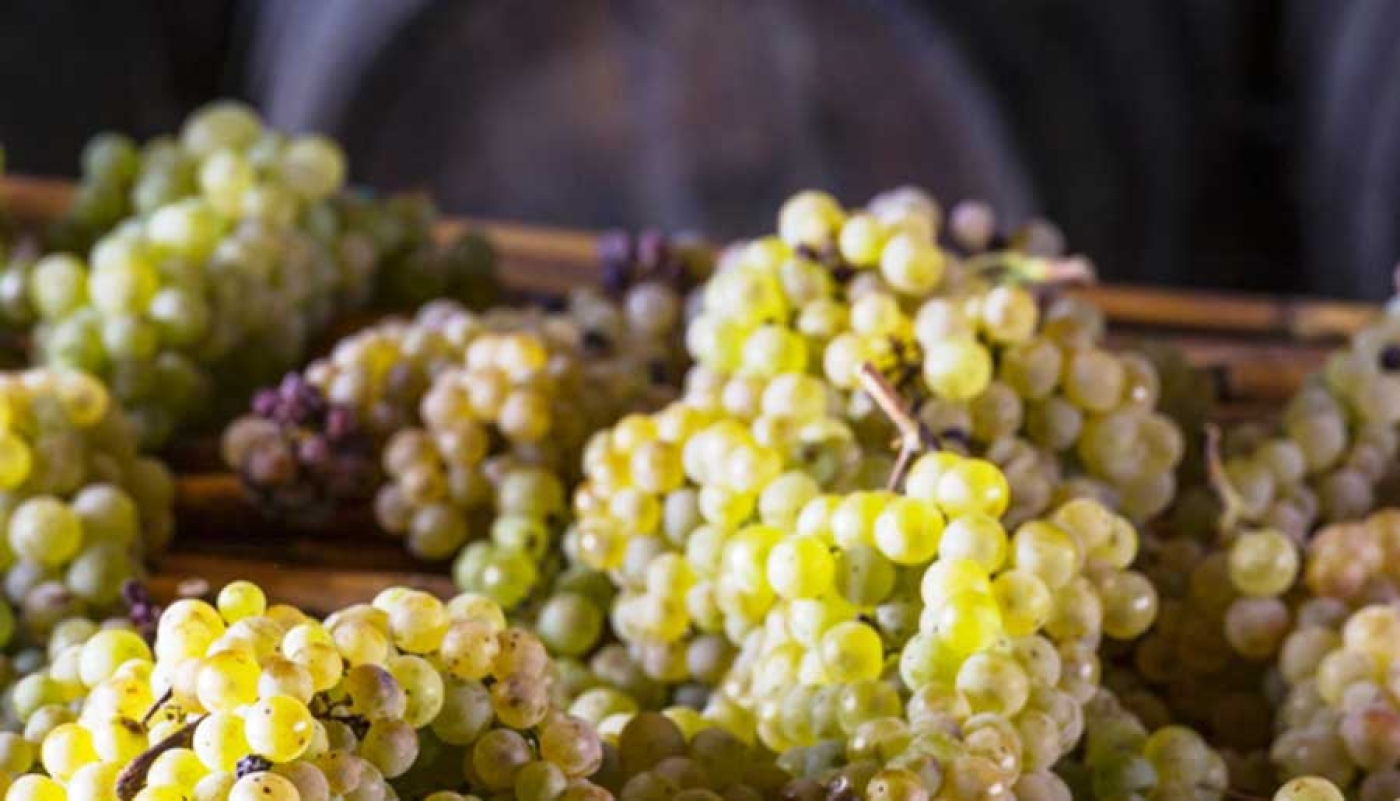 Grapes  for Vin Santo Drying in the Vinsantaia

One of the most characteristic wines of Toscana is Vin Santo. This passito is an ancient and traditional specialty produced throughout the entire region. Its origin dates back to the Middle Ages, but the prototype for this style of wine can be traced back to the Greeks and the Romans.

Most Vin Santo is made from white grapes, typically Trebbiano Toscano and Malvasia Bianca Lunga. It can be made from just one of these grapes but is more commonly a blend of the two. Trebbiano provides acidity while Malvasia provides body, texture and perfume. A rare, pink Vin Santo called Vin Santo Occhio di Pernice (“partridge eye”) is made from red grapes, usually Sangiovese. Only a few producers make this pink version.

There are many theories to explain the origin of the name Vin Santo (holy wine). One of the most likely refers to the fact that the grapes were traditionally pressed and fermented during Holy Week. Other theories refer to the common use of the wine for religious purposes; others again link the word “santo” to “Xanto” in reference to the wine produced on the Greek island of Santorini.

Healthy, ripe grapes are picked and left to dry (appassimento) on racks or straw mats in specific well-aerated rooms such as lofts. Sometimes grapes are left to dry by hanging from rafters. The ensuing desiccation results in concentrated sugars. The duration of the appassimento process may vary according to the style (i.e. sweetness level required) and/or DOC rules. Usually grapes are left to dry at least until December but can go as late as March.

Once the grapes have reached the desired sugar level, they are pressed. The dense, sugary must is then placed into old barrels known as caratelli where a slow fermentation and long maturation will take place. The caratelli vary in size, although 50 litres is the most common size. They are made of chestnut, oak, acacia, juniper or cherry and they are typically only filled to 4/5’s of their total volume.

The caratelli are traditionally located in non-temperature controlled storage rooms or lofts called vinsantaie where they are subjected to seasonal temperature fluctuations. 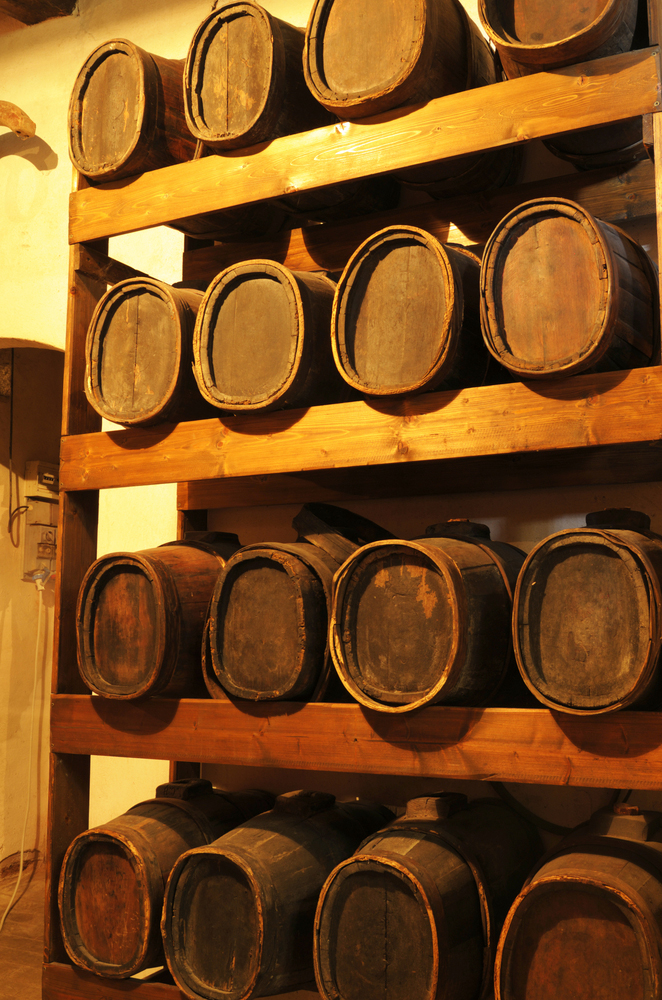 One of the most remarkable elements of the Vin Santo production process is the use of the madre (“mother”) to initiate fermentation. When a caratello is racked, a thick deposit of wine-soaked lees is left in the bottom of the barrel. The newly pressed grape juice will be put into the caratello along with this deposit or residue from the previous fermentation. Over the years, the madre will contain a complex blend of older Vin Santo and lees. The quality and the character of the final Vin Santo is then very much dependent on the quality of the madre.

The minimum ageing period (usually between two to three years) varies by DOC.  However, in order to increase concentration, density and complexity, producers tend to age their Vin Santos for longer periods of time than the minimum required.

Due the unpredictable results of this artisanal, hands-off winemaking process and considering the fact that each single caratello evolves in a different way, tasting and blending becomes fundamental to define the final style and character of each Vin Santo.

Vin Santo may be produced in various sweetness levels, ranging from dry to luscious.

Vin Santo may vary in color from gold to deep amber; Vin Santo Occhio di Pernice shows a pink reddish color. The wines are intense, velvety and demonstrate a pleasant oxidative character along with complex aromas and flavors of nuts, honey, hay, dried fruit, licorice and spice. The best examples of Vin Santo are among Italy’s best dessert wines. 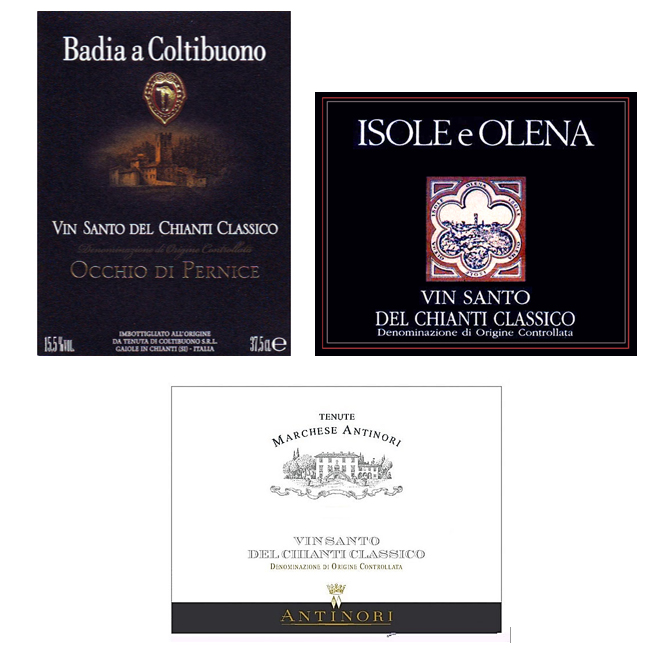 Vin Santo is traditionally offered in Toscana to welcome guests. Many growers make their own small batch of Vin Santo for family consumption or for their friends and neighbors. The dry version (secco) is usually drunk as an aperitif; the sweeter versions are drunk as a dessert wine or paired with blue or hard cheese (like Gorgonzola or Parmigiano Reggiano). Vin Santo is also an excellent vino da meditazione (meditation wine).

Vin Santo is often consumed with the local Tuscan specialty, cantucci, a type of hard, almond cookie. In this classic Tuscan tradition, the cantucci are dunked into the Vin Santo resulting in a cloudy glass of wine and soaked crumbles… although very satisfying, few serious Vin Santo producers will ever suggest this method of enjoying their wine. 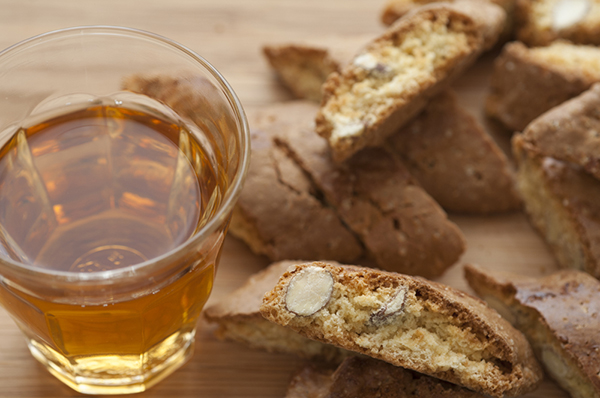