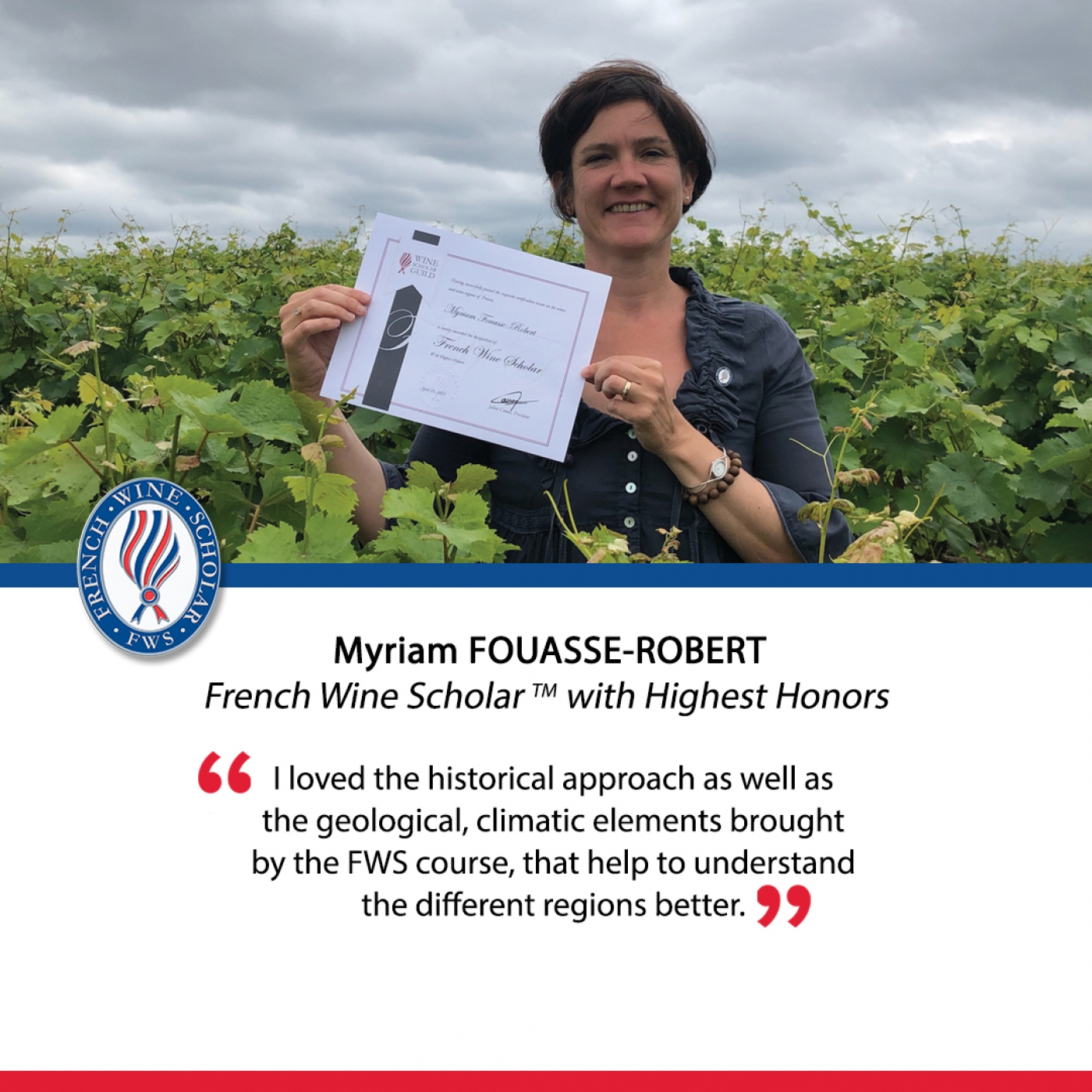 I loved the historical approach as well as the geological, climatic elements brought by the FWS course, that help to understand the different regions better.

I am a wine professional - and a wine lover.

I grew up in Vouvray, in the Loire Valley, which is where my mother is from and where my grandparents had a farm and a small vineyard where they produced Vouvray wine. Then I met and married a  winemaker who also makes Vouvray wines (as well as Crémant de Loire wines).

I was originally an English teacher, but after 9 years working for the French "Education Nationale", I decided it was time for me to do something else. I already had an interest in tourism when I was a teenager, so wine tourism came up as something quite natural when I decided to change jobs. I went back to university for one year, then worked for InterLoire (Interprofession des vins de Loire) and at that point realised that visitors and locals were often asking for tours in the vineyard. It  was 7 years ago and not much was offered in the area to answer this demand then. That's when I decided to create my own company -  'Rendez-Vous dans les Vignes' (Let's meet in the vineyard) - to have people discover the beautiful vineyard landscapes of the Loire Valley, the local wines and the winemaker's work throughout the year. I enjoy meeting people from different backgrounds, different countries and sharing with them what I like about the Loire Valley wines and the region in general.

When I decided to change jobs 9 years ago, I first enrolled in a wine tourism degree offered by the University of Angers, in the Loire Valley.  Two years later, in 2015, I passed WSET 2, then WSET 3 in 2017.

The FWS is an excellent complement to WSET 3 as you get to acquire deeper knowledge about French wines. I loved the historical approach as well as the geological, climatic elements brought by the FWS course, that help to understand the different regions better. The more synthetic approach given by the tutor during the courses in Bordeaux was also interesting and useful as there are some French regions I don't know as well as others - generally regions that I haven't visited or that I visited when I was younger and not interested in wine yet. The course as a whole made me eager to travel all around France and visit those wine-making regions that I don't know so well.

What I've learnt helps me when I organise wine tastings including French wines produced in various regions. Or when I host visitors coming from wine-making regions, I can compare the Loire Valley wines, that I focus on, with the wines produced in the region they come from or that they are used to drinking.

I don't know if I'll keep studying in the next few years. I was originally thinking of taking the WSET Diploma but I know it takes a lot of time and my job doesn't give me enough time for this at the moment.

I am not sure I will keep doing what I am doing now all my life, as it requires a lot of energy. I may change jobs again one day, who knows? But I'd love to keep working in the wine industry and developing links with foreign countries. So I hope the different courses I've taken and the exams I've passed will help me find another job related to wine, as wine and wine tourism have become real passions.