This short article is a follow up to my webinar for WSG of 7th June, 2022. It is primarily a reference piece which aims to give more detailed information than the power point format allows. It includes full listings of the Rive sub-zones, terroir areas identified in studies of the Conegliano Valdobbiadene denomination and lists of producers currently bottling Rive wines.

What are the Rive? (And what they are not)

The Rive are wine growing areas within the Conegliano Valdobbiadene DOCG. They are defined by administrative boundaries, on a larger scale at the level of "comune" (generally translated as 'village') and within the comuni in smaller areas of "Frazione" (approximately translated as 'hamlet'). In the photo below, Farra di Soligo is the name of the comunal Rive and Col San Martino is a "frazione" of the comune. A producer may use one or the other on a label, depending on the location of the vineyards.

There are a total of 43 Rive. Appendix (1) gives the full list, divided by comune and frazione. Not all the comuni have frazioni within their administrative boundaries, so in these cases their wines are represented by a single Rive. There are 15 comuni in the Conegliano Valdobbiadene area and all are included in the Rive system, which theoretically makes for comprehensive coverage of the DOCG, as can be seen in the map below. Only frazioni located in areas unsuitable for viticulture are excluded. 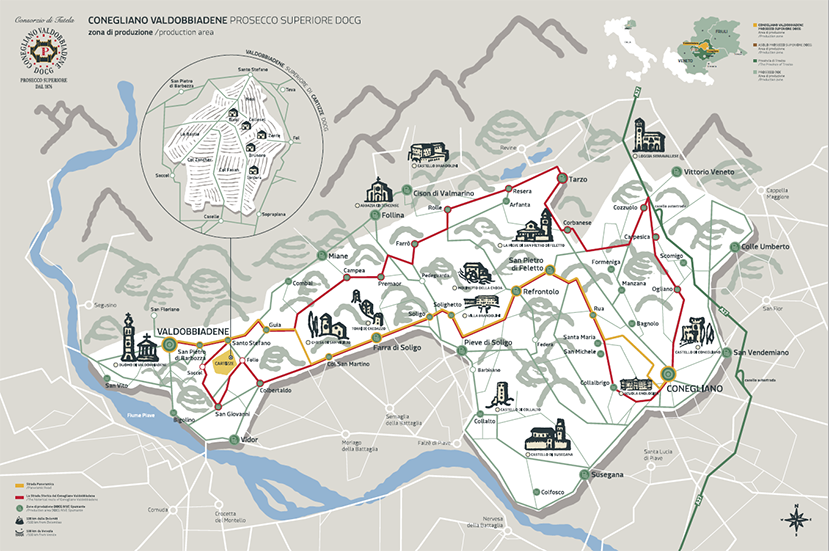 The Rive are sometimes referred to as "cru", but this is misleading. The French "cru" system is based on the classification of vineyard areas according to combination of topography, soils and climate which constitute the quality of a specific "terroir". The Rive are different in two important ways. The first is that they are toponyms, in the sense that they identify places of origin, but not necessarily areas with homogeneous soils and climate. Within the administrative boundaries of a Rive there may be areas with different growing conditions. The second difference is that the Rive occupy a horizontal slot in the Prosecco quality pyramid, without any internal classification.

Studies of the soils and climate of the Conegliano Valdobbiadene area and their impact on the character of the wines conducted over a long period from 1997 to the present have identified 19 specific growing environments within the denomination which the researchers called "terroirs". (Tomasi & Gaiotti (2011 and 2020) and Scienza et al (2020)). The boundaries of the Rive, based as we have seen on administrative areas, rarely correspond directly with those of the terroir zones. In some cases the same terroir extends over a number of Rive, while in others a single Rive may have different terroirs, however on the basis of the studies it is possible to group together Rive in three macro areas, in the east, the centre and the west, with similar growing conditions and wine characters in common.

The low rolling hills of the east and southeast of the DOCG are the most homogeneous in terms of soil and climate. The area is less intensely planted than other parts of the denomination but it produces signficant quantities.The wines have a distinctive character, particularly suited to brut and extra brut styles.

The spectacular landscapes of the central sector have the highest vineyards with the most dramatic gradients. Access is often difficult. Vines are planted on south-facing slopes, protected by dense woods on the northern faces. The wines are amongst the most refined.

The most intensively planted area, which extends without interruption eastwards from Valdobbiadene on mid-elevation slopes. Possibly the most classic Proseccos which combine aroma, fruit and freshness.

The initial take up on Rive bottling was slow. In the first official tasting of the new sub denominations in 2010 there were 14 samples. Since then the Rive have gained momentum and in my recent tastings there have been over 70 wines. The Conegliano Valdobbiadene Consorzio reported a production of 2,396,939 bottles in 2020 and although quantities are limited in the context of a total production of 92 million bottles they are increasing steadily. Production is concentrated in less than half of the total number of 43 Rive. The table in appendix (2) shows the Rive present in official tastings in 2021 and 2022 (fewer in the latter because the tasting was earlier in the year, before many wines were bottled). Collalto and Ogliano from the east stand out for their presence, as do Santo Stefano, San Piertro di Barbozza and Guia from the west.

Who is making wine and where

In the tables in appendix (3) and appendix (4) I have indexed (3) producers by Rive and (4) Rive by producer. The listings are based on presence in official tastings and are certainly not exhaustive, but include all the major producers.

Want to learn more? Watch Richard's webinar on this topic here. Webinars are free for WSG members! Not yet a WSG member? Become one today by clicking here.